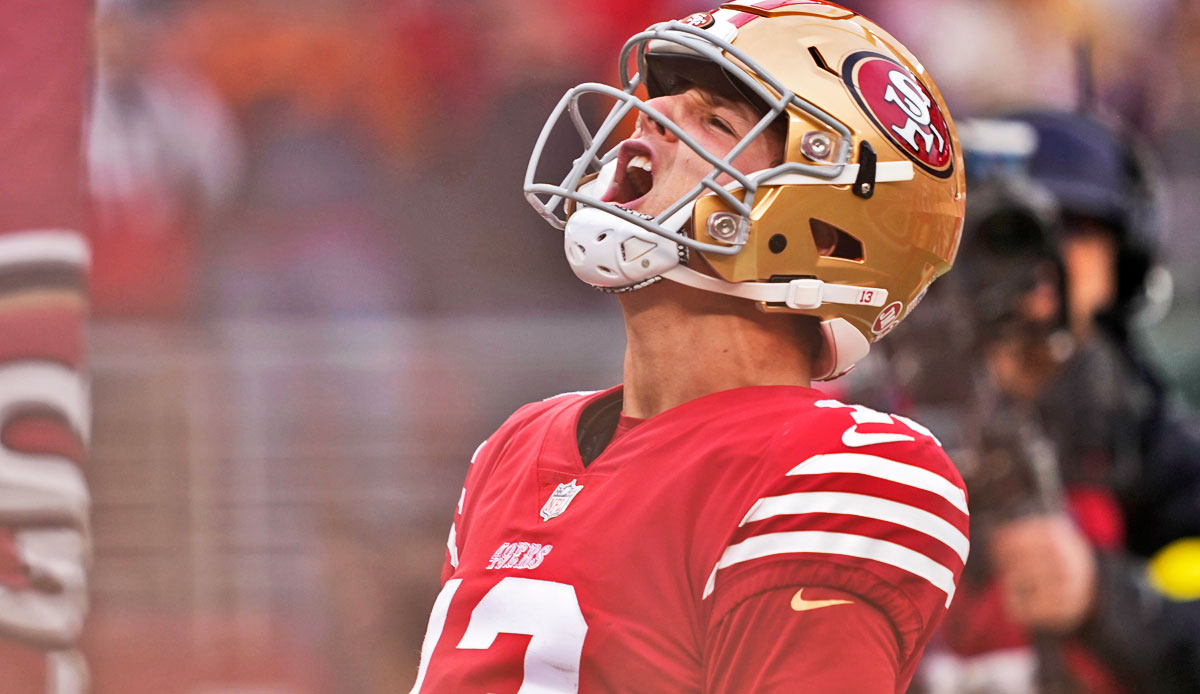 This season’s rising star is clearly rookie quarterback Brock Purdy, Mr. Irrelevant – the last pick – in the last draft. Not only did he take the NFL by storm, he quickly gained respect from peers and coaches alike. Now he’s one game away from the Super Bowl.

The San Francisco 49ers have won their last twelve games in a row, they are the number 2 seed in the NFC and were already one of the big favorites in this conference in the preseason.

In this respect, their entry into the NFC Championship Game shouldn’t come as a surprise, but things didn’t really go according to plan for the Niners on the way here. A few weeks ago, after injuries to Trey Lance and then Jimmy Garoppolo, their third quarterback, Mr. Irrelevant Brock Purdy, started. And it’s no longer irrelevant.

Watch the NFC Championship Game Eagles vs. 49ers on Sunday from 9 p.m. live on DAZN – optionally with US original commentary. Get a subscription now!

What else can you write about Purdy that someone hasn’t already written? And above all, what else can one question about him that he has not long since disproved or proved?

Purdy started in Week 14 and put in a strong showing in his first extended appearance in Week 13 after Jimmy Garoppolo’s injury. And in the playoffs, too, he proved that the task is not too big for him. He put on a gala performance against the Seahawks and at least once was effective enough against the Cowboys’ top defense.

But even if this development came as a complete surprise to the rest of the football world, one person foresaw it very early on.

Rookie guard Spencer Burford took Purdy aside one November day after training on the Air Force Academy campus in Colorado – in preparation for the high-altitude air in Mexico City for the game against the Cardinals – and told him, “Something special is going to happen coming your way. You’re special bro. I don’t know exactly what it’s going to be, but something special is coming your way.”

Three weeks later, Garoppolo was injured and Purdy had to go. “I predicted it! I predicted it!” Purdy quoted Burford afterwards. “He talked it up.” Not the injury, of course, but Purdy’s special ideas since then.

And Purdy’s performances as a starter are undoubtedly something special. His passer rating in the first five starts (119.0) was even higher than Patrick Mahomes’ (116.3) in his first five starts. Only Hall-of-Famer Kurt Warner once surpassed that career start (131.4).

Purdy managed within a very short time not only to fit into the impressive construct that this 49ers offense is in terms of sport – the Niners have the third most efficient pass offense in the NFL with 35.7 percent DVOA, after Weighted DVOA (the games of the younger past scores higher here than earlier in the year), they even rank 2 in overall offense (they’re sixth overall).

He has also quickly managed to gain respect at all levels.

“He took a timeout in his first start ever,” wide receiver Deebo Samuel reported recently. “That kind of shocked me. ‘Kyle, don’t play that play!’ That showed me what kind of guy he is.” We’re talking about head coach Kyle Shanahan, to whom the seventh-round rookie fearlessly signaled that his announced play might not be the best solution after all.

And that’s unusual, after all, Shanahan is one of the best play callers in the league. And even Purdy insists that the key to the team’s success is relying on Shanahan’s game plan. And yet the popular play did not suit him in his first start. A little later, Purdy then threw a 27-yard touchdown pass to Christian McCaffrey – after that it was 21-0 for San Francisco against an already uninspired Tampa Bay Buccaneers team with Tom Brady.

The action made an impression. Purdy is already a recognized leader in the dressing room and impresses with his self-confidence within the team and towards the coaching staff. And even if there is criticism, Purdy sees it positively and reacts accordingly.

General manager John Lynch told Opposite KNBR of a situation where Purdy threw a spectacular touchdown pass to George Kittle in the Week 17 game against the Raiders. Kittle was well covered and wasn’t the first option – on the other side of the endzone, Jauan Jennings would have been completely open, which wasn’t lost on Shanahan. A perfectionist, he was annoyed with the situation despite a touchdown and glared at his QB as he returned to the bench. Purdy noticed, stared back, and pointed a finger at his upper left arm—”ice in the veins.”

“Kyle started laughing. At first he wasn’t happy, but then he said, ‘I couldn’t do anything but giggle.’ They then had a good discussion about the post-game scene,” Lynch said.

However, the scene was also an indication that not everything is going perfectly at Purdy. He has certain tendencies that opponents might exploit. As seen in the narrow win over the Cowboys in the divisional game, he sometimes tends to leave the pocket too early. And when it rolls out to the left, it often becomes inaccurate – rolling out to the right is easier on footwork for a right-handed player. However, no one was punished for this, even if the cowboys tried.

So far things have been going well for Purdy, whose path to this point was by no means a straight one. What if you’re the absolute last pick in the draft?

Purdy’s family played a huge role in his fundamental development and attitude to the sport. Shawn, a minor league pitcher for eight years, demanded only one thing from his three children when it came to sports: give it your all. It doesn’t matter if it’s a professional career or just the game in high school.

And his mother, Carrie, “brings the energy to this family. I think I got that trait from her,” Purdy told reporters. Meanwhile, he probably got his sporting ambition from the fact that his older sister, Whittney, could throw the ball significantly further than Brock. And that was before she played softball at Southeastern University.

So Purdy was challenged early on, which probably led to him deciding against Queen Creek High in his area in Phoenix/Arizona and going to Perry High in Gilbert instead. That school played in a higher division, but had few sporting successes.

Purdy, whose then-coach Preston Jones would still praise him for his attitude and leadership years later, led his team to a state championship game in his senior season and set records for passing yards (4,405) and touchdowns (57). He also ran for 1,016 yards and 10 touchdowns.

However, Purdy was never the classic star, he is too modest for that. He directs hymns of praise to his colleagues – just as he distributes the ball to them. And so, strictly speaking, he’s in exactly the right situation. In the ideal system. Of course, he lives from the outstanding Shanahan scheme, which doesn’t demand too much from a quarterback. Like David Lombardi of The Athletic turned out No team has more players who are consistently as open as the Niners. Deebo Samuel (4.3), Jauan Jennings (3.5) and George Kittle (3.3) have an average of more than 3 yards separation from the nearest receiver at their receptions Next gen stats. And Brandon Aiyuk still has 2.9 yards here.

We’re not even talking about the outstanding playmaker Christian McCaffrey, who is perhaps the best receiver from the backfield in the NFL and has helped shape this offense since his arrival.

Purdy is a sovereign ball distributor within this system, but he also showed that he can break out of the structure if necessary. Is he individually the best quarterback in the NFL? no way. But he could well be the best for this construct 49ers.

And certainly beyond the current season. No one likes to say it openly yet, but the sparrows are whistling quite clearly from the rooftops that Purdy will also start the 2023 season as a starter. Not Trey Lance, for whom you invested three first-round picks.

But as Lance himself knows very well, things can move quickly in the NFL. This year was the year he was supposed to start, but his ankle injury in Week 2 thwarted him and brought Garoppolo – who was supposed to be traded in the offseason – back into play. The latter might be back for a Niners Super Bowl, but only as a backup. And then probably for the last time in this uniform.

For now, though, it’s Purdy’s job, and it has other perks for the Niners. Above all, he comes very cheap as a seventh-round pick – in the next two years he earns less than a million dollars each. And since Lance, as a potential backup, will only earn slightly more with his rookie contract, there will be plenty of resources for the rest of the squad – the status quo with numerous top players around each QB can certainly be maintained for a while.

So something special could be waiting for Purdy for a long time.