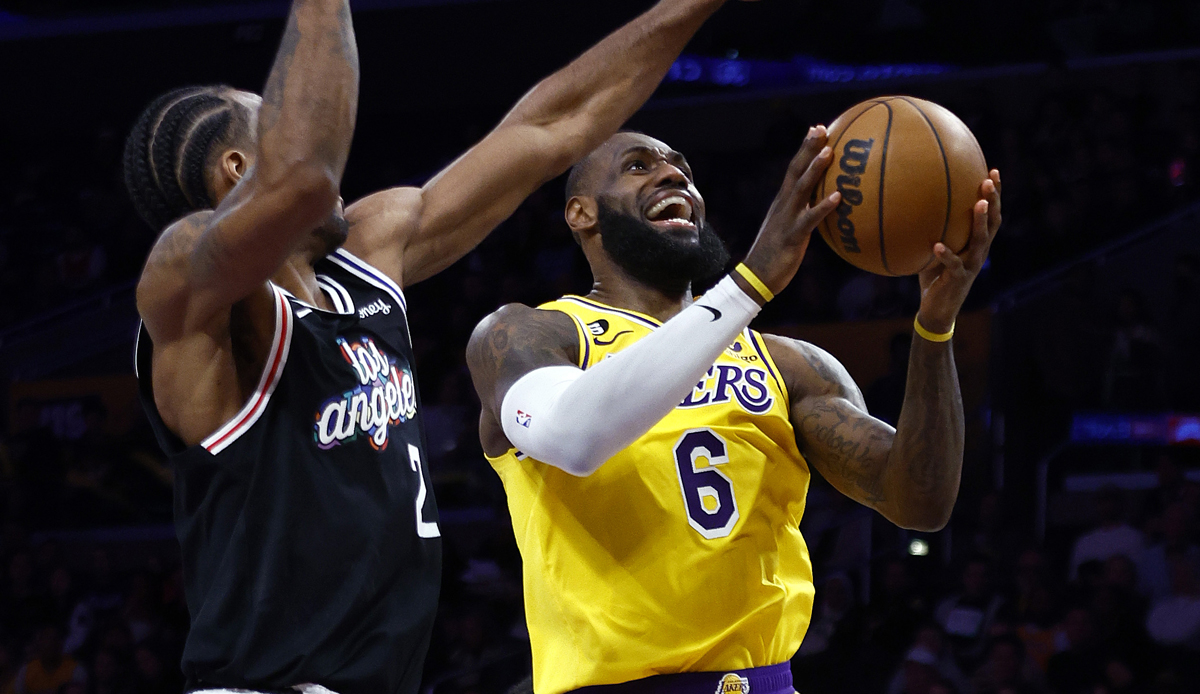 At the start of NBA Rivals Week, the Los Angeles Lakers suffered a clear defeat against their city rivals. At 133:115, the LA Clippers shoot out all the lights at first, then even a record from LeBron James is no longer enough for the Lakers to make a comeback.

On the one hand, James set a new personal career best with 9 converted threes in 14 attempts, on the other hand he gave the Clippers a total of 46 points. The 38-year-old has now scored at least one 40+ point against every NBA team – no other player in league history has done that before him.

In addition, LeBron put up 8 rebounds and 7 assists, but there was a lack of support. Thomas Bryant (15, 7 rebounds) and Russell Westbrook (17), who broke the 24,000 point mark, were the only other Lakers stars in double digits, with Westbrook in particular not falling the jumper (4/13 FG, 8 /13FT). Dennis Schröder also didn’t get enough (7, 3/9 FG), newcomer Rui Hachimura was still on the bench in civilian clothes.

That was not enough against the red-hot Clippers offense. LAC sank more than 60 percent from the field and exactly 50 percent from downtown (19/38), the three-point rain provided relatively clear conditions in the first half. Paul George (27, 9 rebounds) and Kawhi Leonard (25, 9 rebounds) led the Clippers, Norman Powell (22, 4/5 threes) and Reggie Jackson (19, 4/7) also showed a strong performance from the bench . The Clippers have now won ten straight games against city rivals.

The Lakers saw no reason for a change in the starting five after their furious comeback win over Portland. The Clippers also started with their usual top five – and were immediately on fire. Kawhi and George set the tone with their shotmaking, and the bank also got involved. Overall, the Clippers hit 7/13 threes in the first quarter, first James and Schröder and later Wenyen Gabriel (8) and Westbrook kept the Lakers within striking distance (30:37).

The hot shooting of the “guests” continued seamlessly, LAC diligently shot their way to +15. It said something about the Clippers offense that itself such strange things with the head of Ivica Zubac as an intermediate station somehow ended up in the basket. And the rain of three just didn’t stop. Powell put the fitting end to the first half with two more triples. 15/23 three for the Clippers and thus 77:54 – they have never scored more points in one half in the city derby.

The Lakers were back up to 103:113, but then things went downhill again. Several misses and turnovers punished the Clippers with an 8-0 run, Leonard with one Fastbreak slam much to the delight of team owner Steve Ballmer duly finished. LAC pulled away again to +18, Lakers coach Darvin Ham took his starters off the field five minutes before the end of the field and raised the white flag. For the Lakers, the game continues directly against the Spurs on Thursday night, then also with Hachimura and loudly ESPN again with Anthony Davis, provided he doesn’t suffer a setback during the warm-up.

NBA: The Stats Leaders in Lakers vs. Clippers