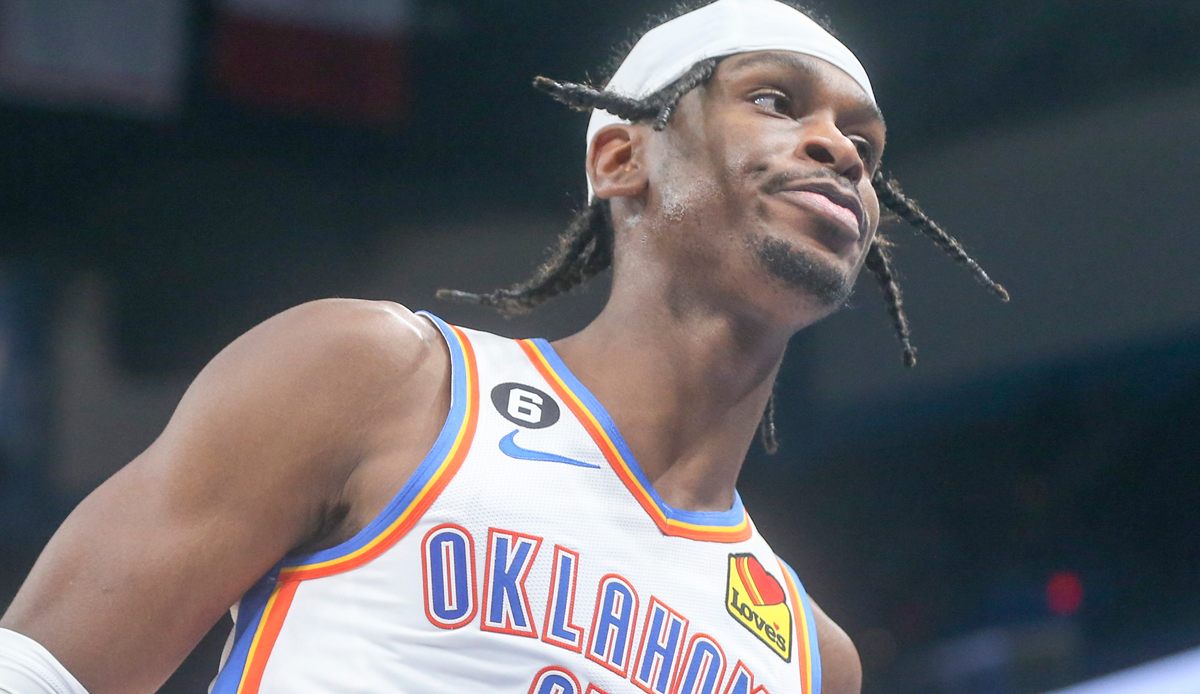 The season is still young, but the first candidates for the Most Improved Player award are already emerging. We look at the most promising candidates from the first weeks of the season.

Anyone who misses a Franz Wagner, for example, should be told that professionals in their second year are not taken into account. These players traditionally don’t stand a chance for the MIP award as they are expected to improve after their rookie season.

But now to the six most promising candidates of the first weeks of the season.

It can no longer be ignored, SGA performs at an All-NBA level and with an efficiency that few others can. Gilgeous-Alexander has always been fascinating in this regard. He doesn’t have the speed of other guards and yet nobody pulls to the basket as often as the Thunder guard.

Over the years, SGA has significantly expanded its skillset. He uses numerous hesitation and spin moves and catches his opponents flat-footed in rows. At the same time, he is extremely creative when it comes to his degrees. The Canadian is not an outstanding athlete, so he often has to take difficult attempts. But he hits them better than almost any other player.

Take this scene from the game against Orlando, for example, when SGA first fools Paolo Banchero and then gets rid of the ball in such a way that the throw can no longer be blocked and it becomes goaltending. Only ten of his 115 attempts in the restricted area have been blocked so far, and he sinks almost 68 percent at the same time.

Of course, its length helps here, but there are numerous forwards who can only dream of such odds. The fact that SGA comes to the basket so often also has to do with the fact that his throw has to be respected. Two years ago, the 24-year-old shot 34 percent from the middle distance, now it’s over 50 percent with a larger volume. This also includes seamless stepbacks that are almost impossible to defend. Check with the Washington Wizards who are separated from “Himmy Carter” capturing such a game winner from downtown…

All of this makes Gilgeous-Alexander one of the best scorers in the NBA. If only the rest of the team could keep up. At least there is a future in sight now, but how good would SGA be if they had more shooters around them? Although OKC continues to tank diligently, Gilgeous-Alexander is actually exactly the type of player you want to draft as your franchise player.

Despite Gilgeous-Alexander’s terrific numbers, the OKC offense remains mediocre. Without SGA, she is a whopping 10.3 points worse, and all Thunder players whose first names are not Shai hit a cool 33.6 percent from outside. It makes SGA’s season even more impressive and makes him arguably the hottest MIP award contender this season.

New situation, new luck. This applies to no one as well as to the Finns. Although Markkanen occupies the top three again in Salt Lake City, in an offense in which all mouths are fed, the big man thrives and thus also confirms his strong ideas from the EuroBasket.

And there’s little to suggest Markkanen can’t keep those performances. The three falls neatly, but not even as well as two years ago in Chicago (then 40.2 percent). However, Markkanen has long ceased to define itself solely by throwing from a distance. He acts much more physically in Utah, the Finn already has more dunks than in his last season in Chicago.

Mostly they come from the flow of offense. Markkanen is perfectly integrated, scores a lot through cuts and smaller pindowns, which are otherwise rather run for smaller players. That’s also what makes the Finn so valuable. He can play alongside bigs or fill one of the big positions himself.

This is made possible by the fact that the Finn has increased defensively. Occasionally Markkanen blocks a throw, but more valuable is his footwork, which allows him to defend on the perimeter and then lend a hand around ringside. It’s just a big leap that Markkanen has made. A three-level scorer who is no slouch defensively – again, it smells like an All-Star.

The Pacers guard was considered one of the big favorites before the season and has cemented his status in the early weeks. And that even works with team success. Quietly, Indiana has streaked five straight wins (granted, the schedule meant well), Haliburton was voted Eastern Player of the Week.

What is particularly striking is the incredible maturity in his game. Haliburton shines less through dynamics, but rather through its almost mechanical game. He always feels like he’s in control of the situation, even if Haliburton often makes his decisions on the spur of the moment. Pacers insider Caitlin Cooper had already written an article worth reading in the summer.

It is particularly pleasing that Haliburton now comes to the ring much more often and also finishes there with a high percentage. It’s not just for this zone though, his shot chart for the season is almost entirely drenched in green. His efficiency is almost everywhere above the league average.

Bane already has a MIP trophy in his closet, given to him by backcourt partner Ja Morant a few months ago, as the Grizzlies superstar felt Bane more deserved it. The shooting guard may get the award this year, because Bane went a step further before a toe injury stopped him for the time being last week.

At this point, only Stephen Curry had sunk more threes than the Grizzlies guard. His scoring average has continued to go up, as has his touches, pick ‘n’ rolls, three-point attempts, usage, and assist rate. In short, Bane is more involved in the Grizzlies game and is even more efficient in a larger role.

The Grizzlies got really lucky at number 30 in the 2020 draft and you no longer have to put on the Grizzlies fan glasses to claim that Memphis is home to possibly the best backcourt in the NBA.

It wasn’t four years ago that the draft nods were wondering if Johnson could play a good role with his shaky throw. There was no doubt about the defense, but the shot lacked consistency. At the end of 2022, only ten players took more distance throws than the Spurs forward, only three of them hit it with a high percentage (Curry, Mitchell, Beasley).

The Spurs extended Johnson’s contract early in the summer (4 years, 74 million). If he continues like this, it will be a real bargain for the Texans and another achievement for the development team. Johnson has also increased when it comes to playmaking. From time to time you can still see the tunnel vision with your drives, but that has gotten much better.

There is still potential for improvement when it comes to finishing at the Ring. As athletic as Johnson is, some of his degrees remain wild. Only 56 percent near the ring is not enough for a dynamic player in his class, and he still relies too often on floaters, which have little chance of success.

Of course, the success of the team of the hour is not only related to the name De’Aaron Fox. Nevertheless: After all the years in which Fox’s potential was confirmed and it didn’t act consistently enough, it seems to have finally really clicked.

Several things help here. On the one hand, the composition of the team fits, Fox is no longer the sole creator, and the Kings finally have shooters in almost all positions. In addition, under new coach Mike Brown, Sacramento is finally playing as fast as it suits the quick-witted point guard.

His high scoring average is currently due to hot shooting (54 percent from the midrange!), but things are finally going well again from downtown. Together with Domantas Sabonis, Fox forms a very interesting tandem from which both benefit. At the end of the game, however, it is usually Fox who gets the coals out of the fire.