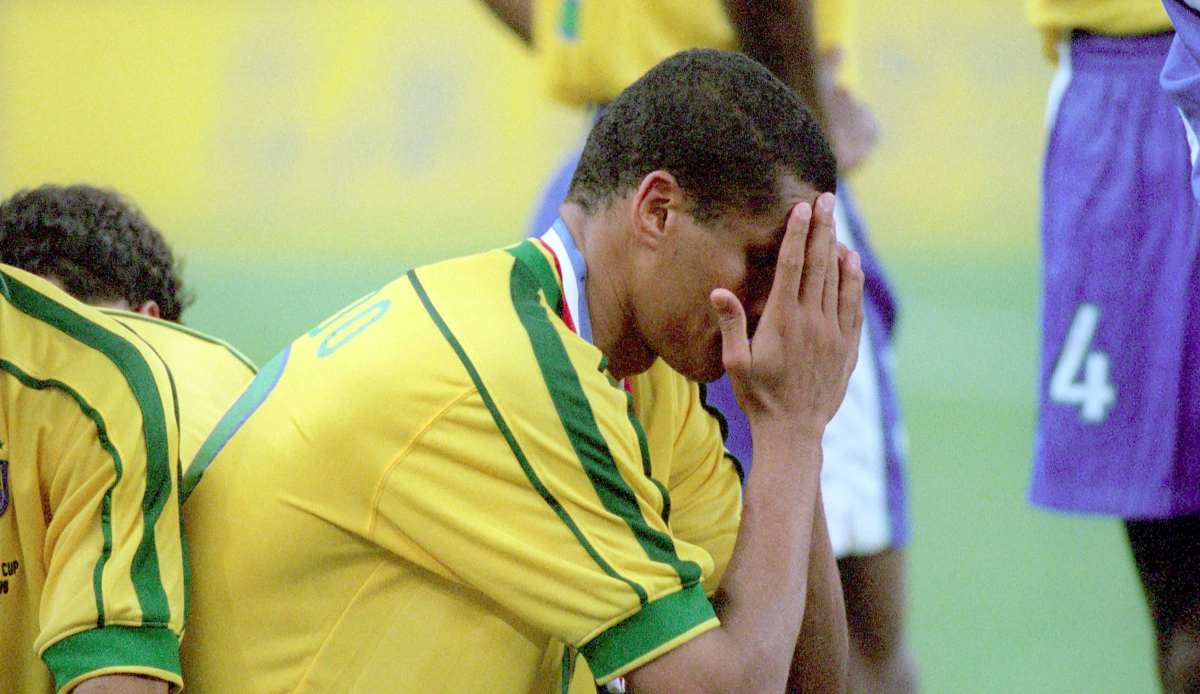 Rivaldo had a great time as a Brazilian international, including the 2002 World Cup title. But things went pretty bad at first. And that led to harsh criticism in Brazil. Especially after the 1996 Olympics.

When you think of Rivaldo, you think of great Brazilian playmakers. One thinks of exquisite technique, an incredibly fine left foot, of magic on the pitch. And of course winning the Ballon d’Or in 1999 or the World Cup title in 2002, in which he was one of the decisive figures of the Selecao together with Ronaldo and Ronaldinho.

But what few people know: A few years before these great successes, Rivaldo was something like public enemy number one in Brazil. But from the front.

Having made his international debut in December 1993, he was considered a surefire contender for Brazil’s 1994 World Cup squad, but then-coach Carlos Alberto Parreira ultimately decided against Rivaldo’s art and in favor of a more pragmatic approach in general. In the end he was right, as the Brazilians were known to have been world champions in the USA at the time.

Even after the 1994 World Cup, Rivaldo was not always nominated before the 1996 Olympic football tournament was to be his first major appearance in the national jersey. But things turned out differently.

Rivaldo: The 1996 Olympics ended in fiasco

Led by young Ronaldo and Bebeto, Rivaldo and Co. made it to the semifinals. Nigeria, which had some big names in its ranks like Jay-Jay Okocha, Nwankwo Kanu and Emmanuel Amunike, was waiting there.

Brazil were still the favorites and were already leading 3-1 at half-time. The two-goal lead was still there when Rivaldo came on in the 67th minute. Then the disaster took its course.

In the 78th minute, Nigeria scored the first goal, and in the 90th minute, Kanu’s 3-3 equalizer ensured that the game was to be decided in extra time. Twelve minutes that Rivaldo lingered on for a long time – especially since the then 24-year-old, who was still under contract with Palmeiras in 1996, carelessly gave up the ball in front of Nigeria’s goal and then failed to take advantage of a few great opportunities.

After just four minutes of extra time, Kanu’s golden goal brought the Nigerians into the Olympic final against Argentina, which they ultimately won and took gold. And Rivaldo? He was branded a scapegoat for this very bitter defeat by the media and fans all over Brazil. Coach Parreira counted him publicly.

“I have bitter memories of that time,” Rivaldo said later. He was not used in the game for third place, which Brazil won 5-0 against Portugal. And he hasn’t been nominated for the national team for over a year.

But ultimately this experience also had something good for Rivaldo. After the Olympics, he moved to Deportivo La Coruna, where he performed well and went to FC Barcelona in 1997 for 23.5 million euros. His world career should really start with the Catalans.

The fiasco at the Olympics and the response to it made him “find the motivation to show everyone that the criticism of me was unjustified,” Rivaldo once emphasized. In autumn 1997 he returned to the Selecao, was one of the stars at the 1998 World Cup and celebrated the 2002 World Cup title. And made sure that today when the name Rivaldo is mentioned, one thinks primarily of great Brazilian playmakers.